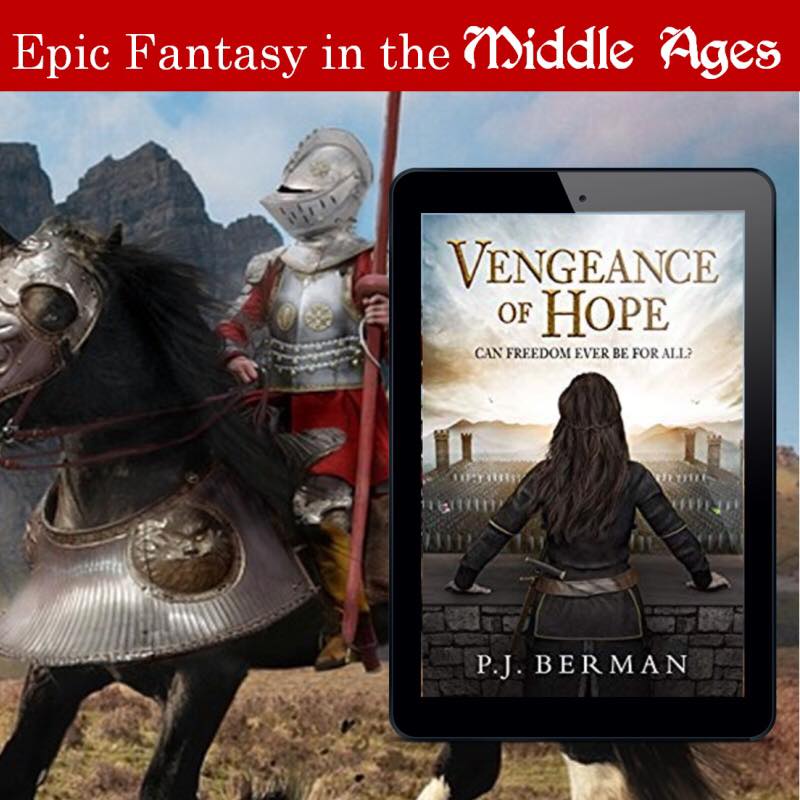 Peter has also recently added a new feature to his website https://www.pjbermanbooks.com/ called Silrith’s Portal. It’s a database of the fantasy world of the Bennvikan where the Silrith series begun in Vengeance takes place. 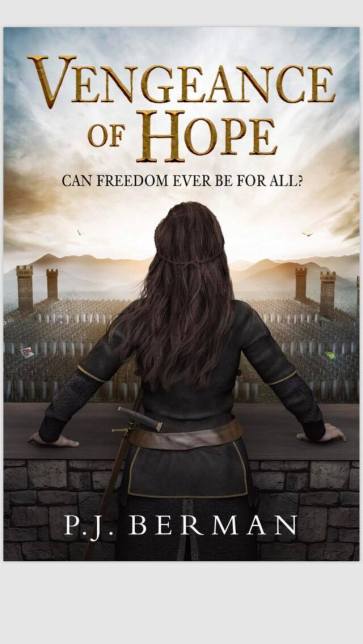 P.J. Berman grew up in Hertfordshire, England. Since then, after a brief but enjoyable period living in Plymouth, Devon, he has settled in the beautiful Welsh countryside of Carmarthenshire, along with his wife, their baby daughter and their crazy Labrador. Given where he has lived, he is probably one of the few people to be a fan of both Stevenage Football Club and the Scarlets.

You can check out Peter’s website for upcoming releases, cover reveals, and more! You can also visit him on Facebook for book news, updates, and reading related fun. Additionally, Peter has a Facebook group for readers who are eager for even more insider information. Visit Goodreads for reviews of Vengeance of Hope and Peter’s thoughts on his own reading list! 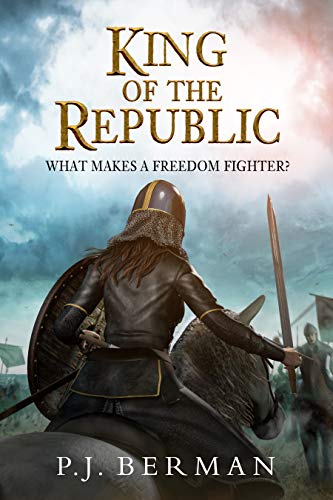 Jess: So, a lot of people seem to think that authors are socially awkward, and I’m afraid I perpetuate the stereotype when left to my own devices. What do you think about that? Are authors the nerds of the art world?

Peter: I don’t think I’ve met any authors who I would describe that way. As for whether it applies to me, I’ll let others be the judge.

Jess: I know we all have our own spin on it, our own demons, as it were, but for your own craft, what’s the hardest thing about writing?

Peter: Finding the time to write while raising a young child. Currently my opportunities to write War of Mercy and Blood and Greed while promoting Vengeance of Hope and King of the Republic are limited to my daughter’s nap times!

Jess: If I can we can pretend time and space don’t matter for a minute, and I could give you a night to have a book club with your favorite authors, which writers would you invite to join you?

Peter: Aside from your good self, I would invite Harry Sidebottom, Simon Scarrow, Joe Abercrombie, Peter V Brett, Conn Iggulden, Anthony Riches, Ben Kane, Alex Rutherford and Bernard Cornwell – and my wife would kill me if I didn’t invite J.K.Rowling! I should also mention that I am very much enjoying reading S.L.Briden’s ‘From the Ashes’, at the moment. The way things are going, I’ll be adding her to my list of favorite authors too!

Jess: Do you have kids? Any budding writers?

Peter: I have just the one child at the moment. She’s 17-months-old, so it’s hard to know how her writing will be, but she does dance every time she hears the faintest music, so who knows, she might do that instead!

Jess: I know I have done this with at least one character and I certainly constantly cast my work, but … Have you ever written a character with an actor in mind?

Peter: Yes, I do this with most of them. I mentally cast actors in other authors’ work as well, especially if it is something that hasn’t yet been dramatized.

Jess: I bet I already know the answer to this, since I think most writers are true to type as book hoarders … Do you have a library at home?

Peter: Not yet, but I dream of changing that one day.

Jess: How liberal are you in term of expressing ideas in your books?

Peter: While I don’t write books with the intention of being political, I do write about issues such as homophobia, the class divide and intolerance of religious diversity.

Jess: If you could live anywhere in the world, which country would you choose and why?

Peter: I’d have to say Sweden. It’s the epitome of the Scandinavian ideal. Their history is fascinating, their countryside is stunning and Stockholm is arguably the most impressively beautiful city I have ever seen. Nature, history and ultra-modernity, all in a perfect balance. What’s not to like?

Jess: Do your novels carry a message?

Peter: Vengeance of Hope has a question that is central to the whole book and the series that follows. That question is Can freedom ever be for all? In my opinion, the short answer is yes.

The long answer, however, is that freedom for everyone is a difficult thing to achieve if there is already inequality, as it requires every member of society to be on board with that idea in order for it to work. In reality, there always seem to be a small number of powerful people who do not want to share that power with others. In Vengeance of Hope, we look at three different freedom fighters and ride with them as they attempt to solve this problem.

Jess: Do you read your own work?

Peter: While it’s very important that writers hire an editor, I think it’s also important that you proofread your work thoroughly. Additionally, when writing subsequent books in a series, it’s a good idea to reread the preceding books and make notes in order to fact-check.

Jess: Do you believe anyone can be a writer?

Peter: Yes. All you need is motivation, practice and an idea. It doesn’t even have to be a particularly amazing idea. It just has to be an idea that makes sense and that you are telling or retelling in your own unique way. As writers often say, its your story and nobody can tell it the way you can.

Jess: Thank you, Peter for taking the time to join us and share your work. Demons Run Lit thoroughly enjoyed having you for Feature Friday!

If you are a fellow creator and would like to appear on Demonsrunlit.com for a Feature Friday, contact us at demonsrunlit@gmail.com and we’ll be happy to set something up. Whether you paint, or draw, write, or sing; if you’re an actor, a poet, a chef, a performance artist … If you are making the world a better, more interesting place through creativity, by building, rather than destroying, we may be able to help you share your story.