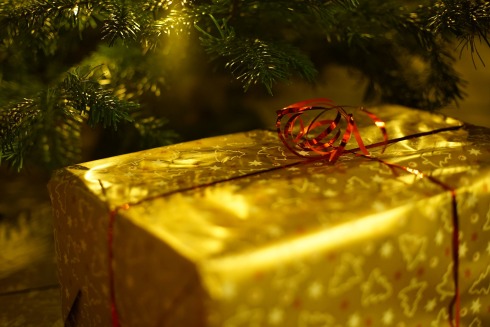 Authors’ Note: “It’s Christmas Eve Day. Both an eve and a day. It’s a Christmas miracle.” (Couldn’t help myself. It’s a thing I do every Christmas Eve. Pop culture references are my weakness.) Here we are at Day 12 of the Twelve Days of Fic-mas 2019. This is a pre-series story from The Arbitratus Universe. Wee baby Mal and her loving parents getting ready for Mal’s first Christmas. And an off camera sort of cameo from one of our favorite side characters. You can read Ari and Maggie’s origin story in Crimson Endings .

“Ari! Can you get the door?” Maggie called. “My hands are covered in cookie dough!”

“I’m on it!” Ari hollered back, from his spot on the family room floor.

Mal’s eyes followed his every move and she tried once again to push up to her knees from her spot on the blanket. At not quite five months, Ari didn’t think there was much danger in her figuring out how to crawl in the space of time it took him to get to the door and back. But since she was already sitting independently and seemed very determined to get mobile, he wasn’t taking any chances.

He lifted her up and placed her in the nearby pack-n-play. She righted herself into a fairly confident sitting position against the nursing pillow they’d stashed in one corner earlier. She picked up one of the brightly colored teething rings recently added to her repertoire of playthings and started gumming it enthusiastically.

“Be right back, Baby Girl.”

She gave him a huge, drooly baby smile in return, already confident he’d be there if she needed him. Other parents in their play group said their babies howled the second they were out of sight. Not Mal. She just seemed to trust life would be good. He hoped her infant optimism would survive teething.

Ari could see a delivery truck in their driveway. He checked the peephole. Standing on their steps was a man in the ubiquitous brown uniform, clipboard in one hand, and rather large package under the opposite arm.

“Hi there,” Ari greeted as he opened the door.

“Afternoon, sir. I have a package for you. Just need a signature.”

The man seemed impatient, but Ari imagined he had a lot to do during the holiday season, and probably got very little in the way of gratitude for it. Ari took the clipboard and signed. “There you go.”

“Thank you, sir.” He handed Ari the box. “You have a Happy Holiday.”

Ari closed the door. He hefted the package, heavy for its size. He looked it over carefully as he headed into the kitchen with it. No return address. Weird.

“Who was it?” Maggie asked, not turning away from what she was doing.

He put the package down on the kitchen table. “Delivery guy. Were you expecting something from your family?”

“Not that I know of. But you know Daddy.” Maggie went to the sink to wash her hands. “He’s so excited to have a new grandbaby to spoil. I keep telling him if he keeps it up, we’re going to need a bigger house.”

Ari grinned. “And what’s he say to that?”

She shook her head, chuckling affectionately. “That there’s plenty of room at the main house now that Bethany has gone off to Loyola.”

“That sounds like Paul alright,’ Ari laughed. He fished a utility knife out of their junk drawer. “Well, let’s see what we’ve got.”

Maggie joined him at the table and helped him move the packing materials out of the way.

Inside was a festively wrapped present, festooned with ribbons, a card tucked in on one side. Maggie frowned. “This can’t be from Dad. Everything he wraps looks like a kid did it.

Ari picked the card off the package. Scrawled across the envelope in a flowing, archaic hand was simply, “Merry Christmas.”

Ari sat down. He didn’t know why a holiday card should give him such a sinking feeling in his stomach, but it did. Perhaps because the handwriting looked all too familiar. And with the familiarity came some unpleasant memories. He desperately hoped he was wrong.

“Are you going to open it?” Maggie sat down across from him, her brow furrowing. Clearly his emotions were apparent to her.

“Um…Yeah.” Ari slit the envelope and drew out a traditional Nativity printed card. He opened it and the writing inside matched the envelope. As his eyes scanned the text, his jaw tightened.

Ari cleared his throat and swallowed.

Congratulations on the birth of little Lady Christ. I’m a little late with my felicitations. I’m sure you’ll forgive me. Or not. It really makes no never mind to me.

Anyway, I hope this here Christmas present makes up for my oversight. Well, not really an oversight. I tried my best, of course, just the moment I heard. But, it’s almost like you folks don’t want to be found.

Despite the challenges, I think I found the perfect gift. It was no easy task either, mind you. I mean, what does one get for the heir apparent of our good buddy Yeshua Ben Yosef? Yes, sir; it definitely was a challenge. Well, don’t want to keep you all from opening this up and sharing it with the little Miss. You all have yourselves a Merry Christmas and all that.

P.S. Tell Lady Christ Senior I love the new hair. It really works for her.

Ari set aside the letter. He was breathing too fast and his face felt hot. He took a deep breath and let it out slowly through pursed lips.

“I take it he’s not a friend of yours.” Maggie’s tone was the sort of worried saved for middle of the night fevers.

“He’s no one’s friend.” Ari eyed the package warily, looking like he was expecting it to start ticking.

Maggie picked up the card. “Funny name, Cain. That’s an unusual Bible name to go for.”

Her eyes widened and her mouth dropped open in a perfect surprised ‘O’. “Wait. Cain is a real person?”

Ari nodded slowly. “He is.” Mal started to fuss softly in the other room. It sounded like maybe she’d tipped over and was frustrated with her efforts to right herself. “And he has no love or even respect for anyone from the Line. Probably especially you and Mal.”

Mal fussed again, louder. That meant she was sleepy. Ari rose and started down the hall to the family room to pick her up. He suddenly wanted to hold her anyway. Maggie followed, still holding the card and glancing at it with something like horror peppered with disbelief.

“Do the Knights know about him?” she asked, now genuinely distressed.

Ari scooped Mal up out of her playpen and her tears stopped instantly. He held her protectively to his chest.

“They do. The Church actually shelters him now from what I understand.” He sighed. “Afraid he’ll cause trouble if he’s unsupervised, I expect. Although seems to me like they need to keep a better eye on him.”

“I guess maybe they should!” Mal whimpered at her mother’s anxious tone. “Here give her to me. She’s ready for a nap.” Maggie stretched out her hands to take their daughter. “Who’s Mama’s hungry girl?”

Ari retrieved the nursing pillow from the playpen and helped the pair settle in the rocking chair by the Christmas tree. “All set? Want some tea?” Ari asked, hoping to ease some of Maggie’s anxiety by doing something comforting from their usual routine.

She shook her head, chewing her lip. “Ari, how did he find us?”

He sighed. “Who knows? But it’s not good. I’m going to go call the Templars.”

“I don’t know. Let’s see what the Knights think. You know they’d love to move us anyway.”

“I know, that’s why I hate involving them. But I guess we have to.” Mal was starting to doze already, but wasn’t quite out enough to move. Ari offered a reassuring smile, and started back toward the kitchen to make the necessary phone calls. Maggie stopped him. “Should we open the box?”

“Okay. Let me know what they say.”

Ari went to the kitchen, finally allowing some of the anger and fear he’d been trying to keep a lid on show on his face now that it wouldn’t worry Maggie more or upset Mal.

He started to pick up the phone, but set it back down almost immediately.

He picked up the box instead and walked it out to the container at the curb, dumping it in, and shuddering a little at the noise it made when it hit the bottom of the barrel.

By the time he got back inside, the cool air had helped settle his mind, and he dialed the number to make arrangements to keep his family safe.

His anger and frustration grew as he listened to the ringing. He knew she wouldn’t remember it, but Ari hated that simple family associations might ruin his little girl’s first Christmas.

Things went from bad to worse once the call was picked up.

“We’re aware of the delivery, Mr. Sinclair. A security team has already been dispatched to your location to evaluate the situation.”

He hung up, dreading relaying the conversation to Maggie.

“Merry Christmas, Cain,” he growled as he headed back down the hall, trying to regain his composure.